It’s beginning to look a lot like Christmas…in Liverpool that is! 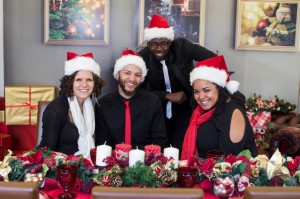 It may only be the beginning of September, but shoppers in Liverpool were treated to a day of early Christmas festivities as Liverpool One played host to a special one-off Christmas-themed event.

The festive event gave the general public a sneak preview into what to expect when The Ultimate Christmas Fair – exclusively partnered with Waterfront Magazine – heads to Liverpool at the end of November for its four-day luxury Christmas extravaganza. 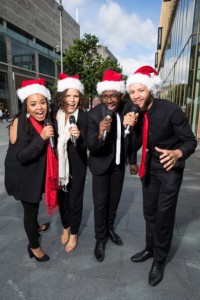 The Ultimate Christmas Fair team transformed Paradise Place into a winter wonderland to mark the launch of ticket sales, with a tree, traditional Christmas dinner table and presents being brought in for the day. Passers-by were welcomed to join in the fun with warm mulled wine, mince pies and were even entertained with a selection of traditional Christmas carols from the talented gospel singing group, Get Gospel – finalists in the BBC Songs of Praise Gospel Choir of the Year 2015 competition.

Christmas spirits were high among shoppers, with many taking family snapshots on their phones to celebrate a spot of early Christmas cheer.

As part of its debut in Liverpool, the show has teamed up with Alder Hey Children’s Charity, donating proceeds from all children’s tickets to the charity, as well as staging a special VIP fashion show to help raise vital funds. With patrons including Wayne and Coleen Rooney and Olympic gymnast Beth Tweddle, the charity funds life-saving medical equipment and research at Alder Hey Children’s Hospital in West Derby.

Tickets to the four-day event are now on sale and as part of an exclusive early bird offer, entry-only tickets are available for £14.95, including a bottle of fizz and box of chocolate truffles, if booked by the end of September.

There are a selection of ticket options available for the event, with general admission tickets priced at £14.95 online: www.theultimatechristmasfair.co.uk/visiting/tickets. General admission tickets can also be purchased on the door for £18.00. VIP packages – including complimentary glass of fizz on arrival, three-course lunch in the No. 10 South Dock Bistro Restaurant and goody bag – are priced from £75.

The Fair, which will be held at the brand new Exhibition Centre Liverpool from 26 – 29 November, will  act as a one-stop shop for everything Christmas, allowing shoppers to buy quality, distinctive Christmas gifts from over 250 high-end retailers and local businesses, as well viewing live demonstrations and visiting an exclusive Festive Food Hall.